My airbrushes are cheap.  They came with the compressor and you can find them on their own for about £5 on e-bay. They clog often and are a bit temperamental, but so much better than having no airbrush at all. I haven't really done any detail work with them because I think it would be quite tricky, but for priming, putting down the main colours and adding zenithal lighting, they work pretty well.

Now I have my modelling corner, I can keep my airbrushes out. Which means I need a holder, since up until now I only had one out at a time and it lived in the cleaning pot holder when not in my hand. With both out and always ready, I could use them more and get more out of them.

I checked Amazon for a multi-airbrush holder and found a cheap one.  It then recommended the cheap range from Iwata, the Neo. "Cheap" here is around £50, which is ten times the value of my current brushes and a bit extravagant for a tool I use to prime and shade.

But I noticed that the page said that the price was for a pack of 10. I assumed it was an error, because you could pick to buy 10, 20 30 and so on, instead of 1, 2, 3...  And this would make them £5 each, which is clearly wrong.  So I did The Right Thing and contacted customer services.  Who, even after me explaining more than once that this must be a mistake, told me I would definitely get 10 airbrushes for just under £50. I just want to be clear on this. I explained very thoroughly.

The rep even said I should get it if it was such a good deal. So I bought it. If I got 10, I'd sell the others cheapish on e-bay and have a few extra models in my queue.  If I got a single one, I'd send it back.

I got one single airbrush in the post the next day.  I contacted Amazon and explained that even after me explaining the issue, they still didn't seem to have understood the problem.  They offered to send me a return slip, but I was a bit annoyed and said so.  Their answer was to honour the price (if not the quantity) that I would have paid for a single airbrush if things had gone as they promised.

And now I have a nice shiny airbrush for £5.  I used it for the first time last night and it was wonderful.  It was easy to clean, didn't get blocked, had a very smooth dual-action trigger that meant I had lots of control. 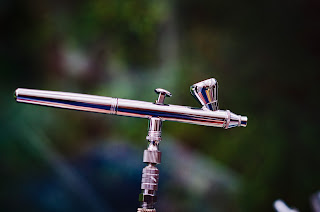 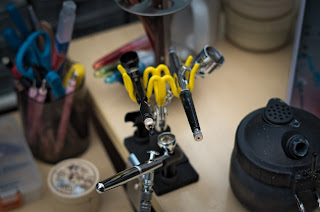 I just put some solid colour on my jetbikes and riders, did a few broad highlights and called it a night, but I will be trying some more detailed work this evening. 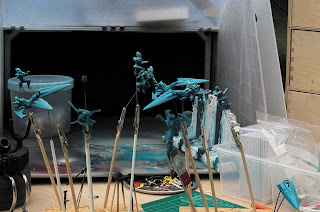