The thing is, I really don't like Eldar heads and the ranger models have bare heads (and knee-high leather boots, for some eason: have a look).  I like Eldar helmets, though.  So, I decided to build something a bit different rather than trying to find rangers on ebay.

Nobody likes swooping hawks, it sees.  You can get them quite cheap.  I got some metal hawks for a couple of quid. I don't want the wings, but the poses are great and really flowing.  I've bent legs and reposed them, sometimes adding something they're leaning on - like catalogue models, maybe.

I then snipped of the barrels of their guns and made them into sniper rifles with nice long barrels.  I'm quite proud of those guns.  I drilled into the stock and put in a pin.  Then I put the pin into the copper tube and glued it.  The aluminium tube was then cut to make the thicker parts of the barrel.

And I did it all with a mostly blunt razor saw.  I need to find some blades. 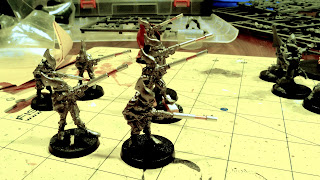 Next I wanted to make them look like sneaky snipers.  So I made them fabulous capes.  I mean, camouflage cloaks.  This was quite fun. I squashed some air-drying clay into mesh material to make sheets of flexible clay that stayed whole and bent up like material when compressed.  The mesh was once wrapped around some flowers from Tesco.  I also pressed some designs into the bottoms of some of the cloaks. 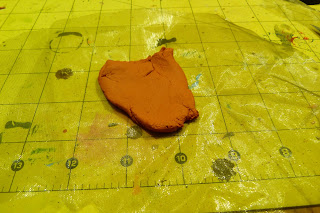 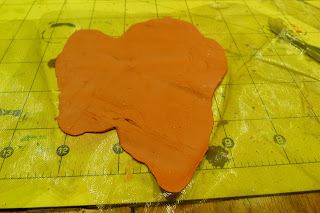 I then shaped this around the model to look like it was draped around them or concealment (like this guy creeping up steps) or flying out behind them as they run  (the ones leaning forward in a dash, thanks to their previous existence as Swooping Hawks). 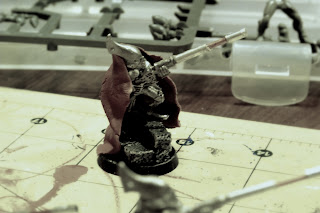 Cotton to hold everything in place while it dries. 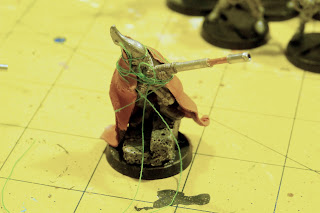 Here's another.  I curled the bottom up on this one later and made it look like it was caught in the wind. Like a lethal Marilyn Monroe, 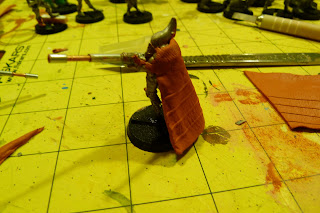 And here they are, looking all around for threats and showing of their cloaks.  I resisted the urge to add a cloak to all of them.  It was so fun to do, but I don't want a squad of people pretending to be superman. 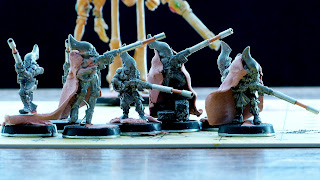 I'm priming them for painting right now.  I'm going to go for a grey/blue/black camouflag-ish colouring, I think.
Posted by Digehode at 00:24