This blog will be the diary of my return to wargaming.  I played a tiny amount when I was young, but did a fair amount of model painting.  I'm now 33, with a wife, children, a career and everything that goes with that and I'm trying to fit in some hobby time, too.

The return started when my five-year-old son stopped at the window of Games Workshop and asked if he could have some of those modules one day.  I told him they didn't come painted and that he'd have to paint them.  This only made him want the more.  Then I told him that there were hundreds of them, in different armies, all sold separately and it wasn't just the few on the window in a set.  Well, now he was excited.  Then I told him that you were supposed to play games with them rather than just collect them. Now he was *really* excited.

So, a few weeks later, we picked up the latest Warhammer 40k box set: Dark Vengeance. We split it.  He wanted the "good guys" so he took the Dark Angels (relatively good) and I got the Chaos Space Marines (definitely bad guys). We started painting, slowly, and while my son is happy doing a bit of painting and shuffling things around the table while holding a tape-measure, I'm hooked. 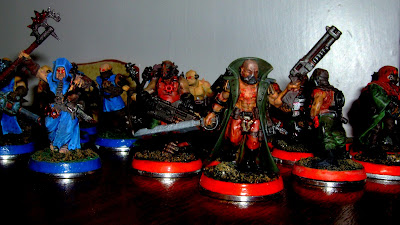