I found something cool.  USE ME: the Ultra Simple Engine for Miniature Engagements.

As a GNU/Linux/FOSS zealot the acronym pleased me a lot.

USE ME is a rule-set for miniature wargaming that's supposed to be general enough to allow you to use any figures you want, although the creators have a range of 15mm figures that would work well.  I like the way it can deal with any model you want to use.  You decide what features your figures have and then work out the points cost.  It costs all of £3.50 to buy the book, which is a neat little A6 booklet, or you can get a PDF version.  Go to www.15mm.co.uk to get a copy.

There are flavours for sci-fi, post-apocalypse, cyberpunk, zombies and so on.  I haven't read anything other than the sci-fi one yet, but I will get to the others.

So, excited about the miniatures, I wanted to get some and play straight away.  It was just before Christmas and I really wanted to start painting over the break so I e-mailed to ask and got a prompt, positive response.  That's a good start.  The fact that I was paying 38p per miniature was good, too!

Anyway, my haul of miniatures arrived on time and I'm still painting.  Currently I have just about enough painted for the first scenario in the "Terminus" adventure on the Barking Irons blog.  It was written by Gavin Syme, author of the USE ME rules, so it should be a good first scenario.

I went for "muster" troops from www.15mm.co.uk to play the landing party and a big bunch of Zidhe from the same place to play Terminus forces.  Need to get a spaceship but since that's mostly just scenery and cover, it can wait.  I have enough (when combined with other things lying around) to play the 60-strong terminus force of the following scenario, too, but painting them up will take a while.

Here they are, stuck to bases and primed. 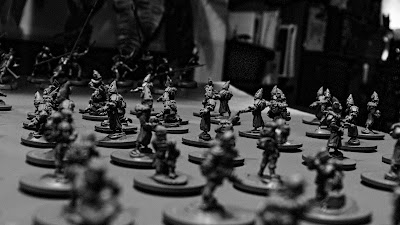 I'll post some shots of the painted miniatures later.  I'm now thinking about a cyberpunk scenario set in alleys and office buildings.  Time to get making more environments, I think.