The Road to Haven

I'm going to be attending the Haven event on the 6th of September run by the Overlords. It will be my first ever 40K event. I've been looking around for things to get involved in and when I heard about this it seemed perfect. The overlords podcast is the best 40K podcast I've heard, the hosts seem to have similar attitudes to playing to myself and they take pride in being welcoming and guaranteeing everyone gets a game.

The problem is, I can't take my Craftworld eBay Eldar army because it's strictly an Imperium vs. Chaos event.

I had planned to build a bunch of tanks and take a fully mechanised Guard contingent.  I've been having great fun scratch-building tanks, but so far I've got around 0.3 tanks complete.

So, instead, I'm going to take a bunch of Chaos Space Marines. The Chaos Lord and cultists from the Dark Vengeance box are painted and I just need to add a few more cultists and a sorcerer.

I've been busily building the sorcerer and cultists. The cultists have taken time because I don't like repetition in what's meant to be a rag-tag collection of misfits.

The sorcerer is almost ready to paint.

I'm imagining that the sorcerer, who I have named Scall, was until fairly recently a "young" space marine in a little-known chapter.  He'd made an excellent scout and was proud to be given a shiny suit of power armour.  In battle, he was becoming well-known for accurate shooting and always managing to avoid taking hits even when a hail of bullets were heading his way.

He was so good, the librarian attached to his unit started watching him more closely. What he noticed was that Scall not only dived out of the way just in time, but started moving before the threat was apparent.  And when firing, he could fire a single shot that would instantly kill an enemy that stepped around a corner into its path. The librarian was interested.  And a little jealous.  Prescience was an ability he had spent decades learning and this marine seemed to be achieving it by accident.

During a campaign to clear Orks from a small agri-world, the librarian watching Scall noticed that his bolter rounds not only hit more, but did more damage. They tore through armour that the rounds of other marines bounced off.  Scall seemed not to notice. He was totally sure of the Emperor's guidance and didn't think any of his luck was unusual.

As the campaign wore on, Scall's unusual abilities began to make his brothers nervous.  He fired more shots. More than he had ammo.  They did more damage, causing explosions even on rainy days with nothing even remotely flammable near by.

One day, Scall's unit was ambushed by dozens of boyz. In the first few moments, one of the brothers fell and was hacked apart by the rampaging orks.  Scall screamed furiously as he reached for his bolter, and as he did, every ork in sight fell dead.  The librarian was aware of more, though.  A darkness around Scall.  Not an absence of light - nothing the other marines could see - but a superimposition of the warp.  The librarian was sure now: Scall was tainted.

The chapter master, hearing the librarian's report, wanted to execute Scall, but the librarian argued against it.  If Scall died, it would probably be enough to tip the balance and allow the warp energy attached to Scall to make its way into reality fully. As it was, it was a shadow, exerting its influence but unable to take a form of its own.

So, instead, Scall was told he was to be trained as a librarian and his psy abilities honed. He was told a message had been sent to the chapter's homeworld and he must wait on a barren planet to be collected.

So he waited. It took many months for Scall to lose his grip on reality. A smarter mind would have succumbed earlier.  When it finally happened, Karthos, a Chaos Lord loyal to Tzeentch, was there to collect his prize. Telling Scall that he was the one sent to collect and train him, Karthos carefully maintained a delusion in Scall's mind.  Even as he releases unimaginable warp energies to tear apart marines of the chapter to which he once belonged, Scall believes he is serving the Emporer, using His magical gifts to do His work.


The base for Scall.  The "banner" will be behind him. It's clearly Chaos and also playing on the skull/halo motif used by the Imperium, but with a severed head instead.  Scall probably will never notice. 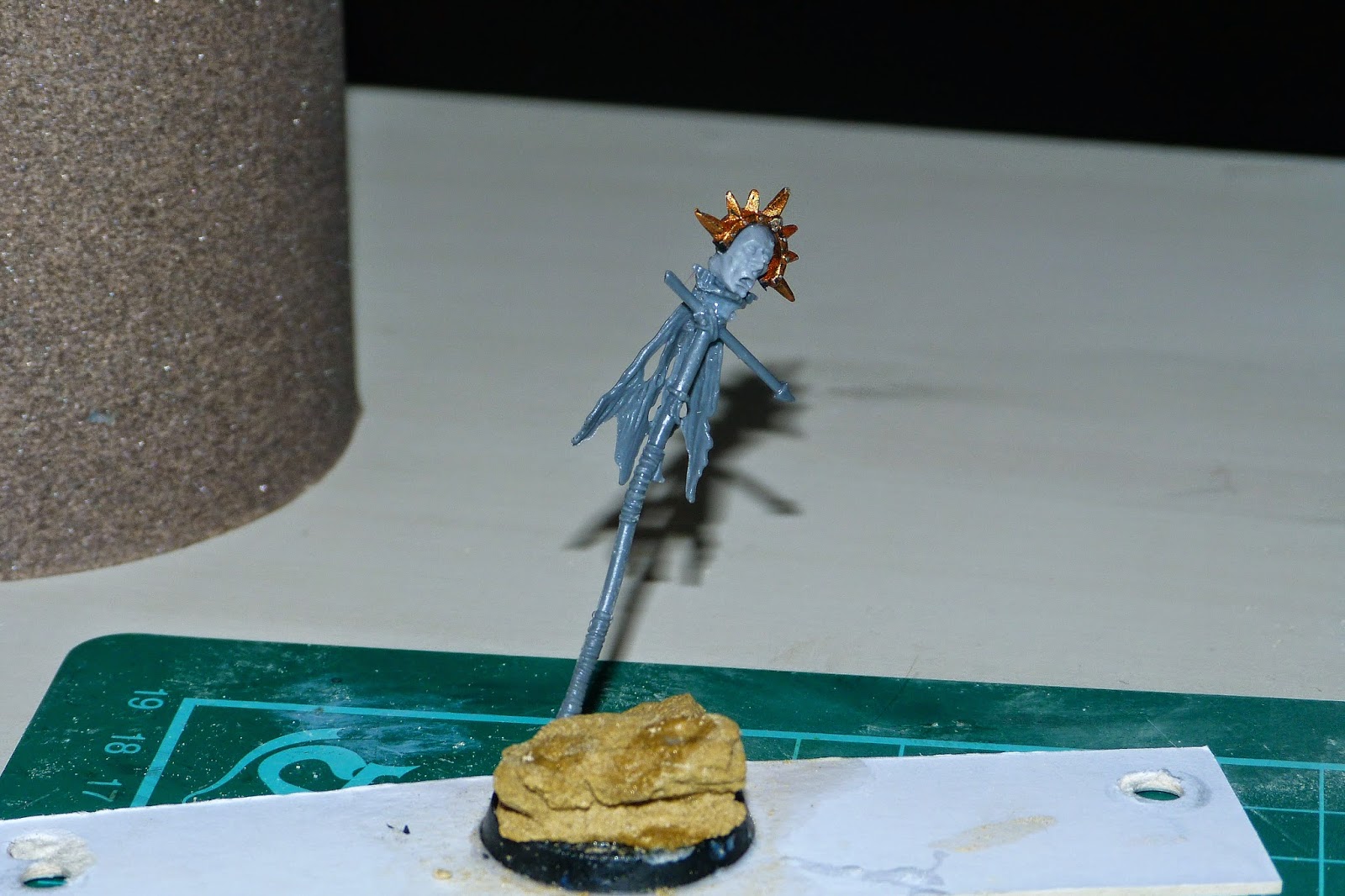 I wanted only small indications of the influence of the ruinous powers. The bolter has the beginnings of a spike to match Karthos's adornments. Karthos is represented by the chaos lord model from the DV box. 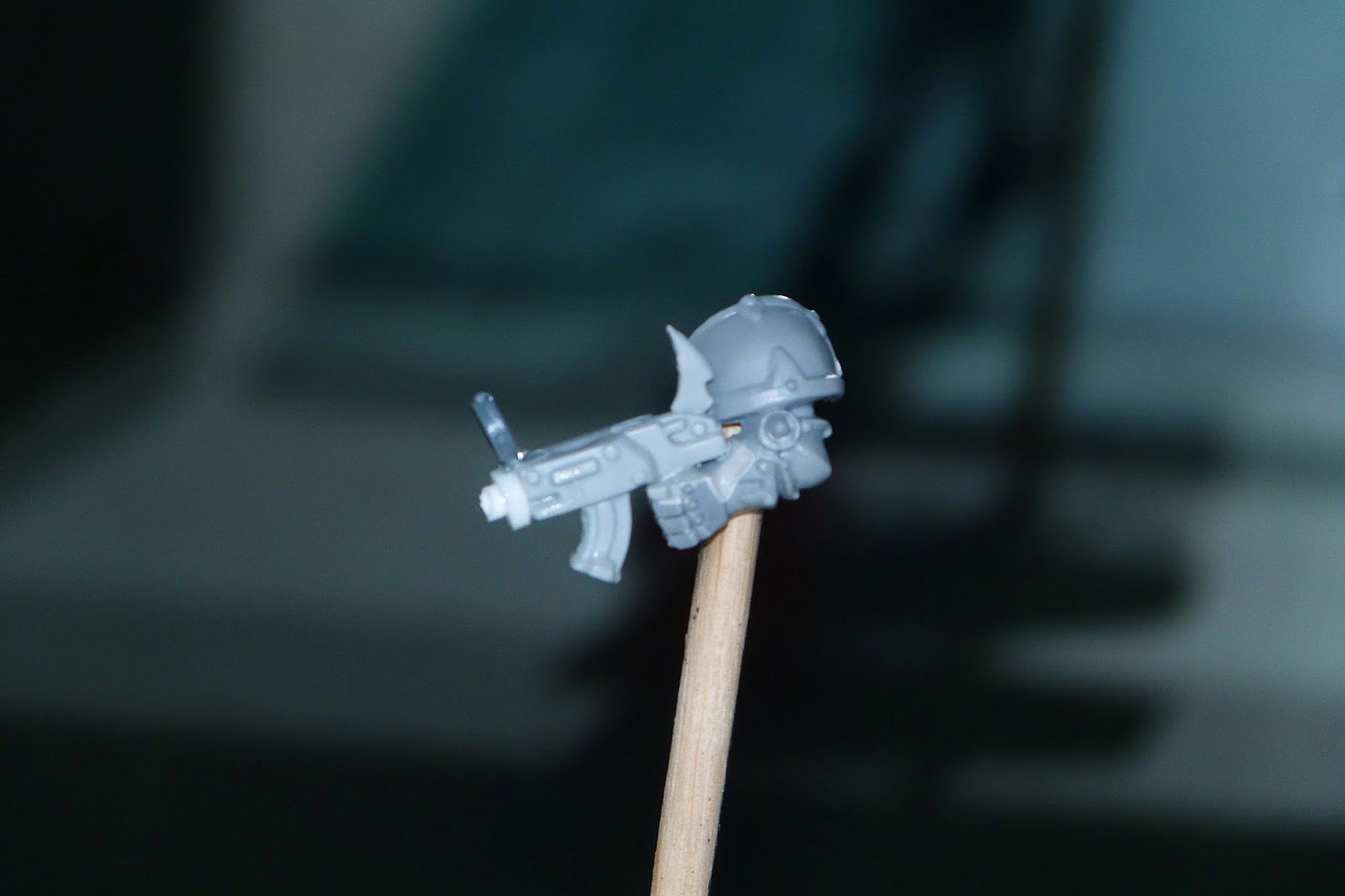 Scall on his base.  More Dark Eldar spike mullets were chopped up to make the staff. 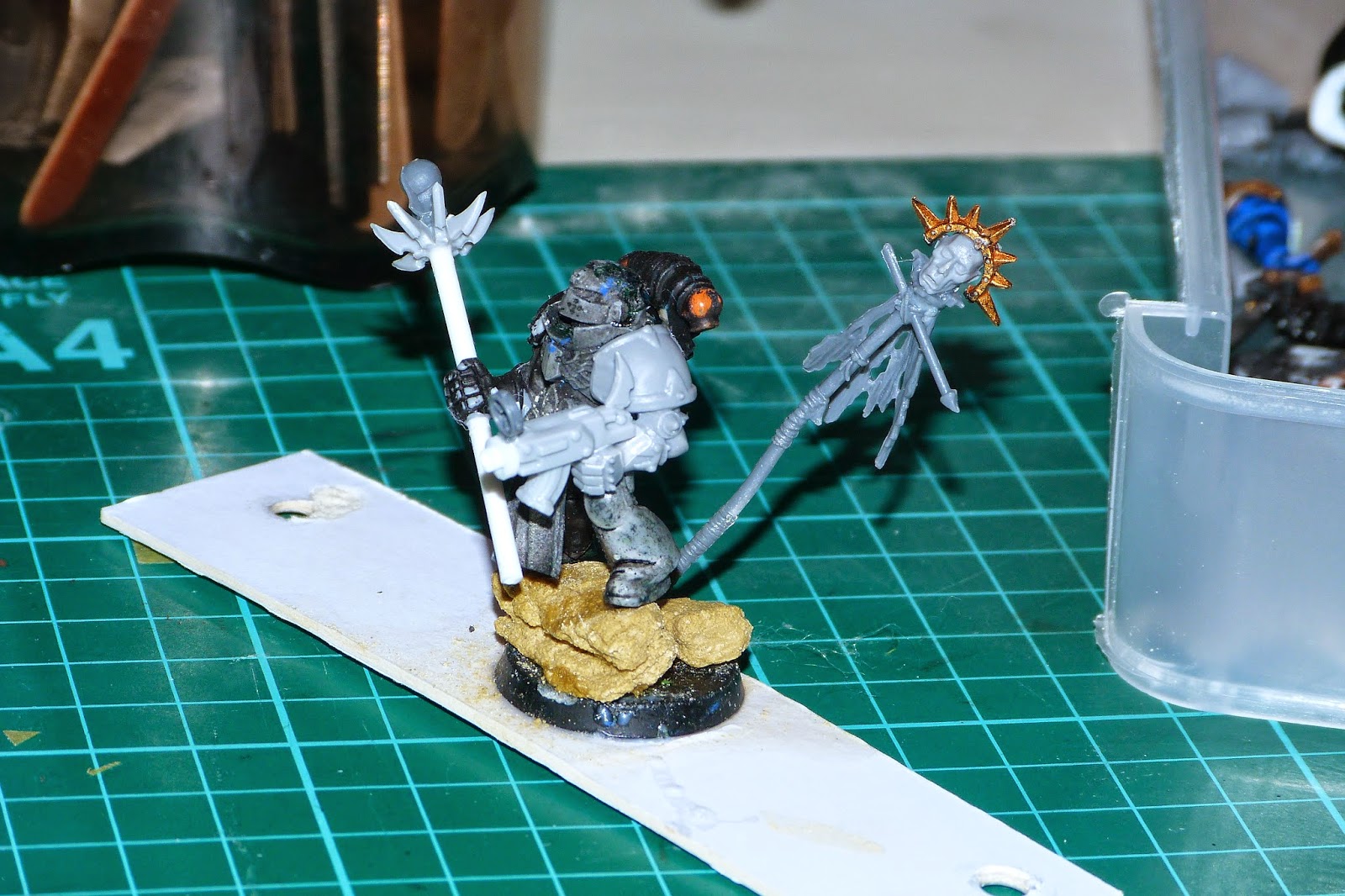 And finally one the new cultists.  I enjoyed making his weapon.  It's going to be painted like a chunk of sheet metal has just been bolted to a pole.  More danger of concussion than a slice, maybe, but that's OK. As long as something dies, this guy will be happy. 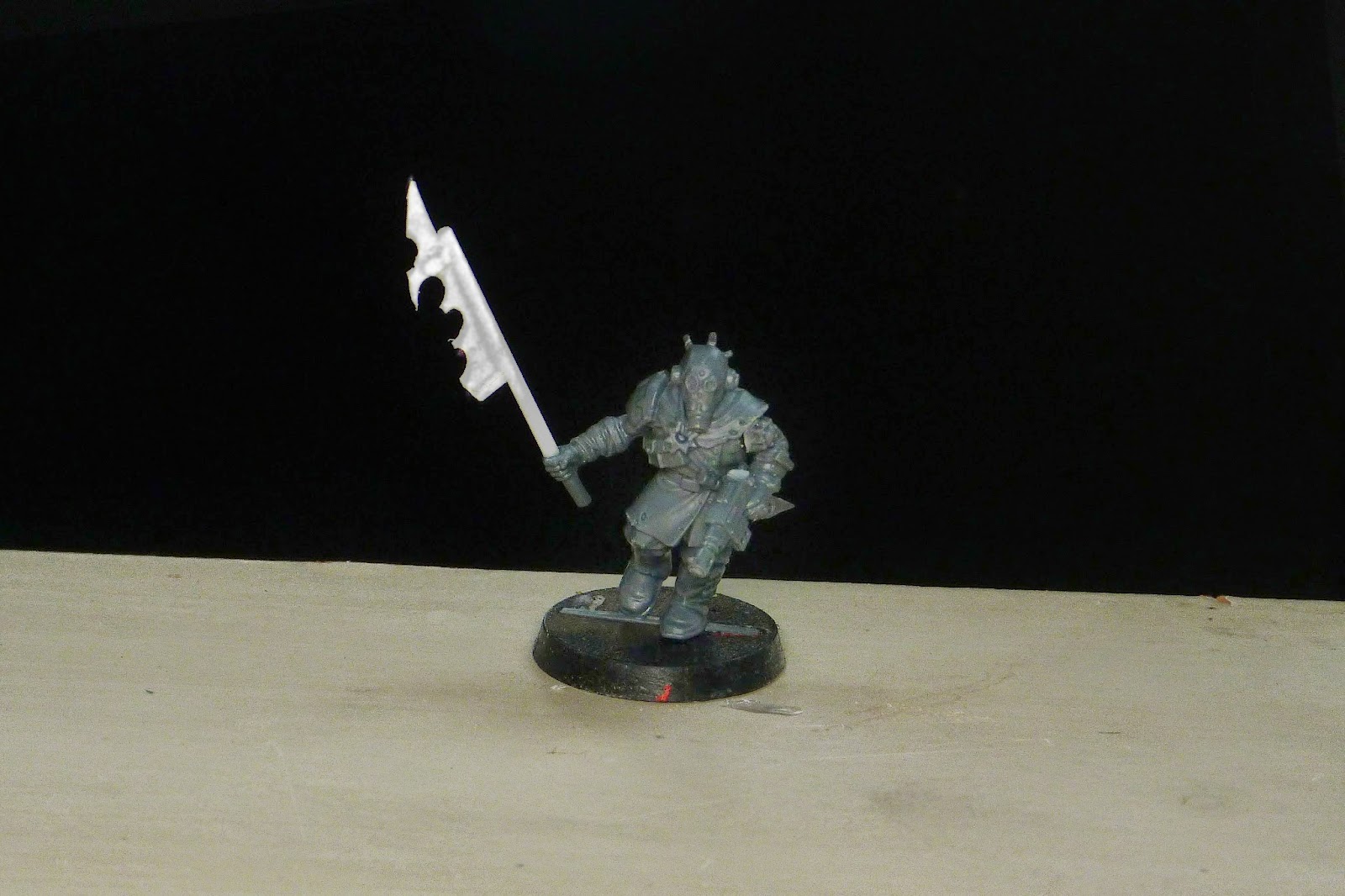