My son and I managed to get a 750 point game in today. Hopefully the first of many over the summer holiday.

He's been painting Orks since Christmas and today was the first real outing for them.

His list was an Ork warband from the new codex: 6 units of boyz, one of gretchin, a warboss, a unit of nobz and a mek. The warboss took "da lucky stikk", cybork body and mega armour, so it was pretty much unkillable. One of the units of boyz was in a trukk and carried a waaagh banner, joined by the mek, and the nobz swanned around on bikes.

I took 5 dire avengers in a wave serpent, 3 lots of 3 jetbikes, a farseer with the spirit stone of cheap psychic abilities, two jetbike arlocks and a double scatter-laser wraithlord with ghost-glave.

We played long table edges, 3 tactical objective cards per turn. No rolling, we just wanted to get started. Eldar won the roll-off for first turn. 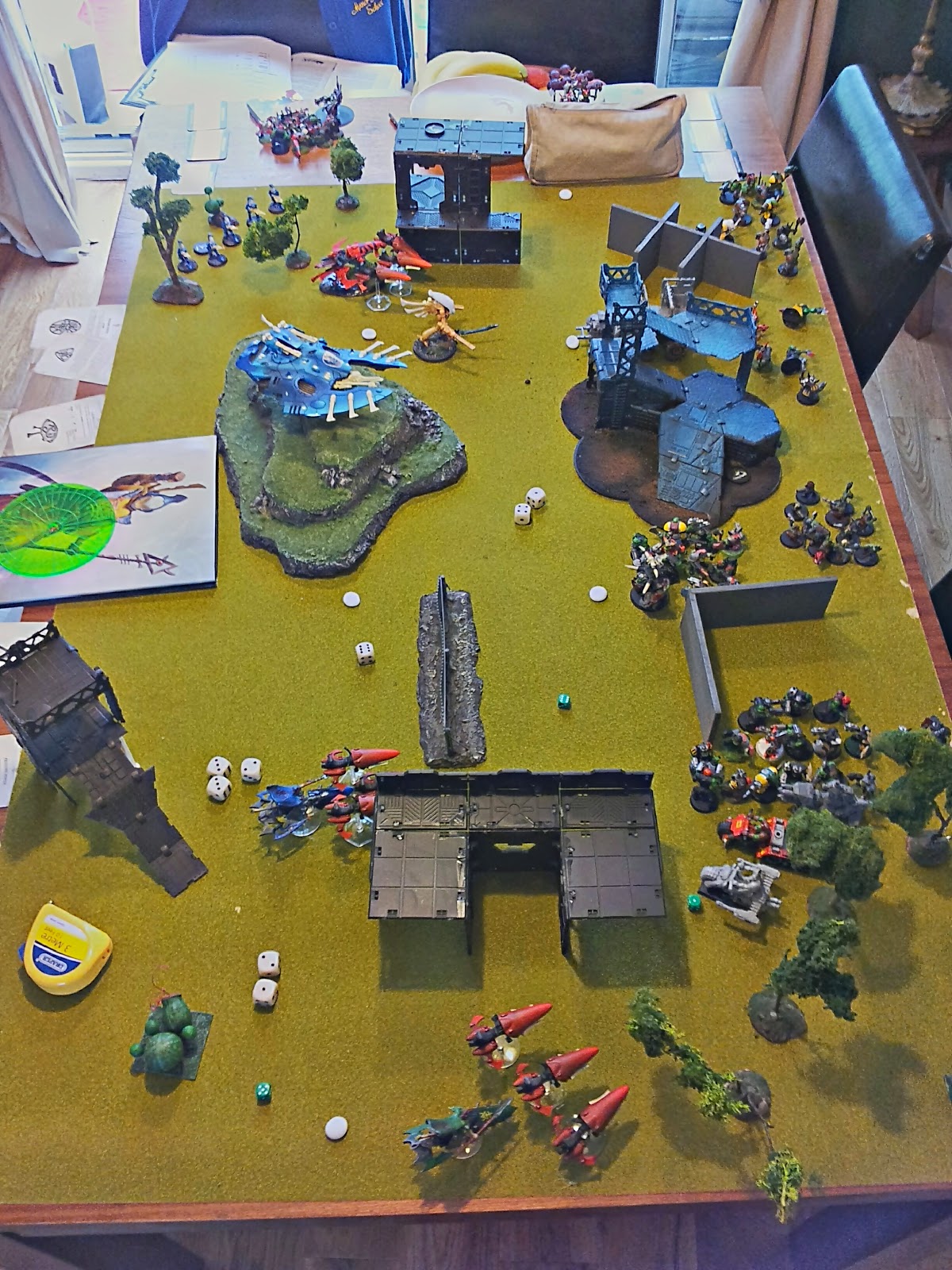 The wave serpent was perched on a hill in order to get as much fire into the orks as possible before we were totally overrun.  This turn, it wiped out the trukk with a combination of scatter laser and shuriken fire. In the image above it's hidden by the blue building in the top right hand quarter of the table.

It was also sitting on Obj. 4, which meant I scored it twice (two cards) at the end of the round.

The unit of boyz that fell out of the trukk then got hosed by the wraithlord and ran straight off the edge for another point.

The dire avengers sat twiddling their thumbs on top of an objective that scored another point.

The farseer used Eldritch Storm on a unit of boys, leaving half of them dead and the rest pinned.

One of the jetbike units fires pointlessly at the nob bikers. 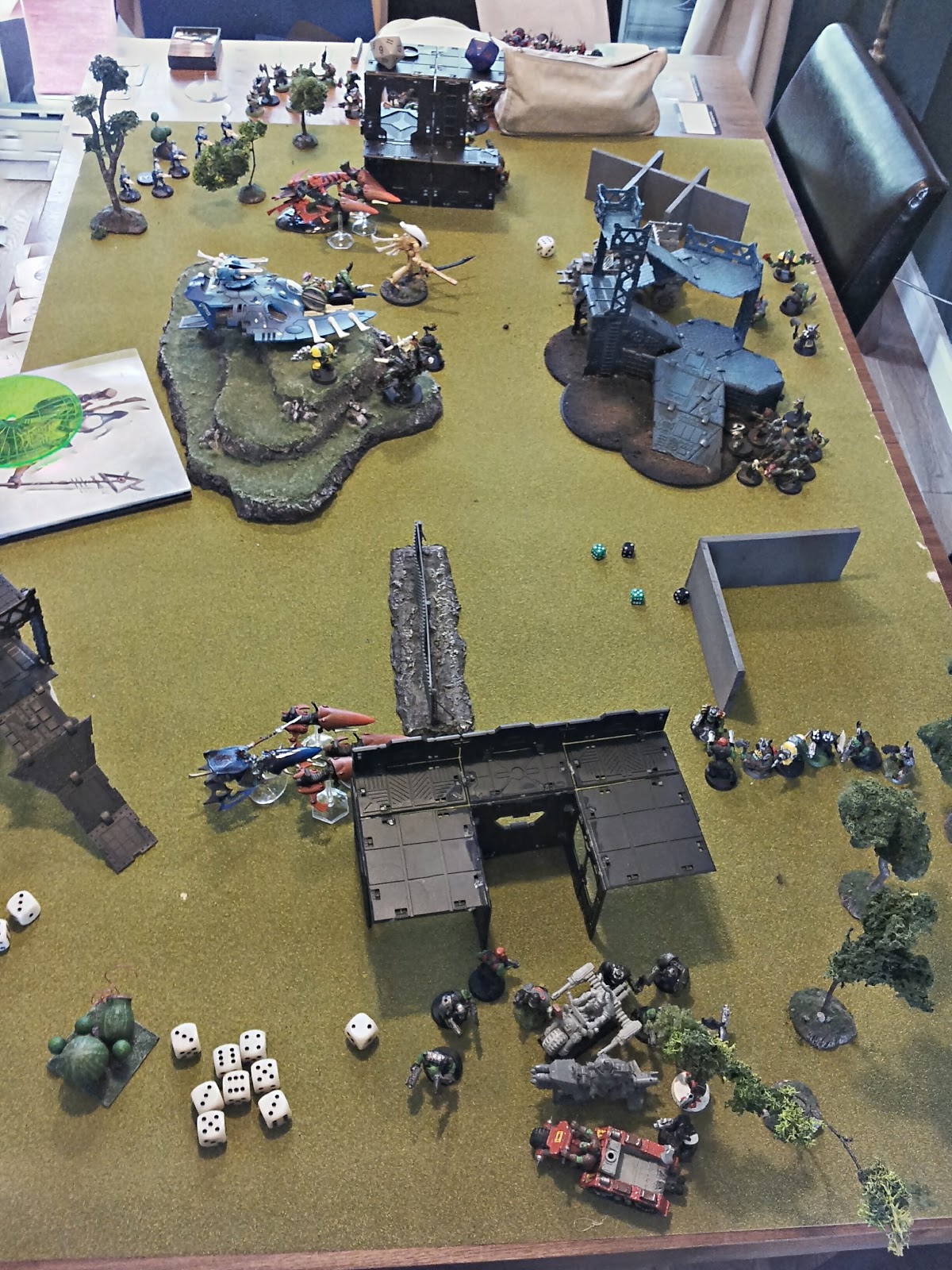 Nobz return fire, then, in tandem with another unit of boyz,  brutally assault the jetbike unit that was silly enough to draw their attention. The jetbikes lasted for just a few seconds before being snatched out of the air by the nobz.

While this is happening, the warboss saunters over to the wave serpent and proceeds to tear it to shreds with his power claw.  The resulting explosion takes out a few boyz, but the warboss (and Sam) finds this to be just a little more entertainment and nothing to worry about. 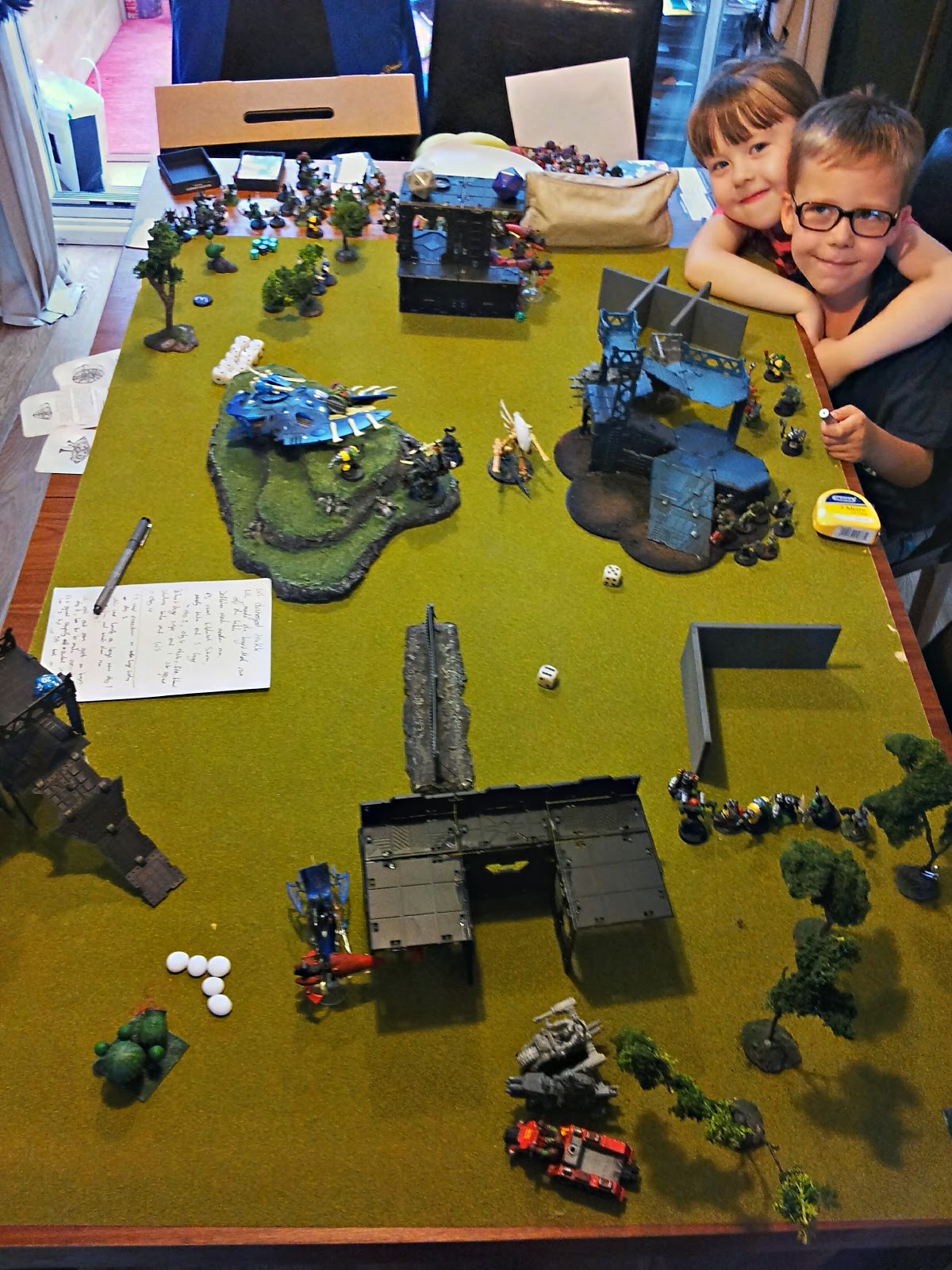 The farseer use executioner on the orks lurking around objective 5.

The remaining jetbike/warlock unit uses horrify on the boyz that would be contesting objective 1 (bottom of the table in the picture, just under the overhang of the building), then shoot enough of them to make them run away thanks to a leadership of now just 4. The jetbike unit is now free to claim objective 1. I was lucky again and had this as a target on two cards, so another two points to the Eldar.

The wraithlord shot a few of the grots hanging out on objective 6 (right hand side of the table in the photo, in the crook of the blue scaffolding building). They didn't run, but left fewer to cause problems for the jetbikes that would be shooting over next turn. He tried to assault, but needed to roll a 10 and failed.

And then the farseer did something silly: he changed his mind about shooting over to score objective 6 next turn and assaulted the boyz hiding in the building at the top of the table.  He nearly died, losing two wounds. What he should have done is not worried about shooting and zoomed off to stay out of range.

The dire avengers fired uselessly at the unit of boyz with the warboss that were lounging around the wave serpent wreck and laughing.

Not much happens, but a lot gets set up to happen next turn.

The running boyz that got horrified run clear off the board.

The grots snuggle back on to the objective that the farseer is now ignoring because he's still locked in a combat he should have kept away from.  They're smug, too, because it's now worth a point to them.

Nob bikes charge warlock/jetbike unit, warboss charges into the wraithlord, boyz and jetbikes exchange blows but nothing decisive comes of it.

Dire avengers charge in to help him. They don't help much. Unless giving the orks more things to hit counts as helping.

The wraithlord, down to his last wound, tries to smash the warboss. It was the right move. It failed, but it was still the best option. Dead wraithlord.

Eldar do nothing much in combat except fail to die.

The grots make a mad dash to try for the newly important objective 2, but fail the run they needed so badly. We called it here because it was getting close to Sam's bedtime. A win for the Eldar, but what would have happened with more turns?

My prediction is that the jetbike/farseer/dire avenger combo would have won the combat and gone on to score a few more, taking out the grots and the last of the boyz. The warboss would have continued charging around but not having targets stay close enough to get hurt.  The bikes might have been a problem for the dire avengers, but who knows?

We both had a lot of fun and got just a little bit quicker at playing.  One day we will get a game that lasts more than three turns. 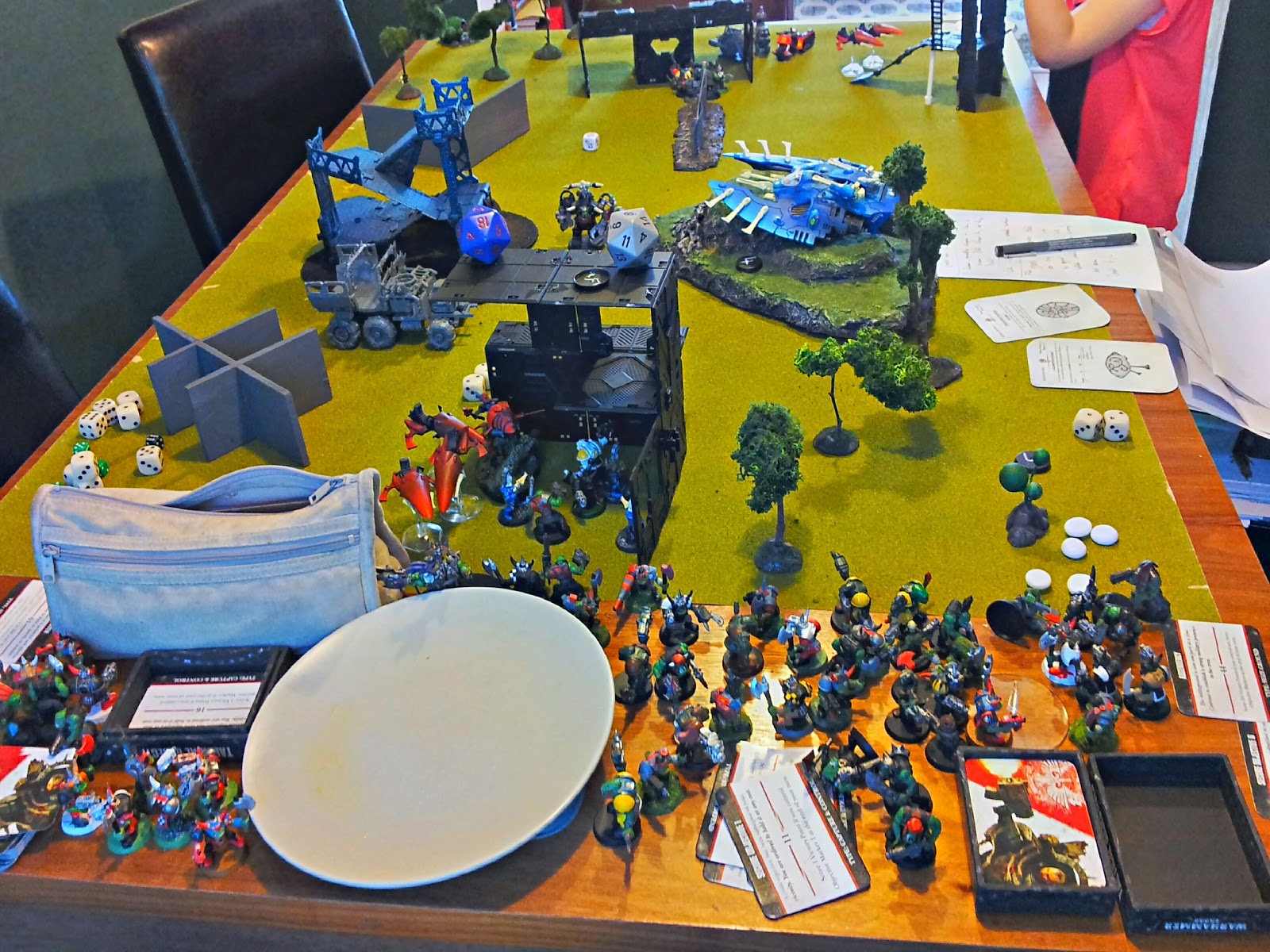 Remember that there were still more orks on the table than Eldar at the end of the game! There are just so many of them!
Posted by Digehode at 14:39