Progress on anything has been slow lately. Too much real-life stuff happening.

Sam and I played a 40K game against someone in the GW shop in Wolverhampton as part of their beginner tutorial sessions.  It was very useful to have a human being on hand who knows the rules inside-out. We'll be trying to do that again some time.

My daughter, Emma, decided she wants to get in on the painting so I've built her a marine with a rocket-launcher.  He'll be our first plain Chaos Space Marine.  I need a few more to make a unit.  Something scoring but more durable than the cultists.  Damned cultists.  They die so quickly I think I should have modelled them all horizontal. 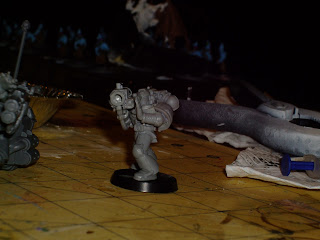 And while the bits box was open, I also built Sam a new Ravenwing biker to add to his unit of 3.  He has lots of guns. 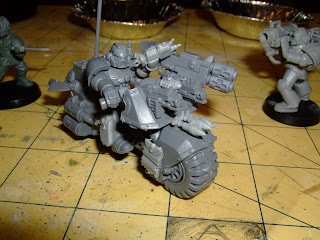 And, finally, I found a hope for the shot-gun-cultist-leader's head that I removed a while back.  I now have a traitorous guardsman (cultist) with a grenade and a knife.  I wanted to get him to look like he's just about to lob the grenade while in the middle of fighting with his knife.  I think it sort-of worked, too. 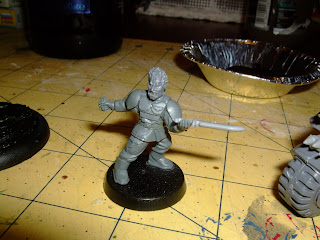 I also built a dead/dying Eldar holding a metal pipe to sit against a barrier we've been building.  And a genestealer head to sit on the floor next to him.

And, finally, I have build and basecoated Lilith and a Mature Nephilim for Malifaux.  I have yet to play a game, but once the Lilith starter crew is done I will proxy in some other crew and play a game by myself to get used to the rules.  The fluff is great, though. 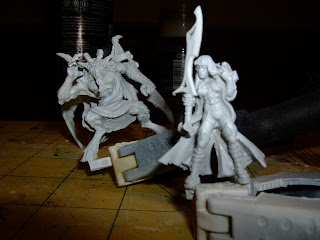